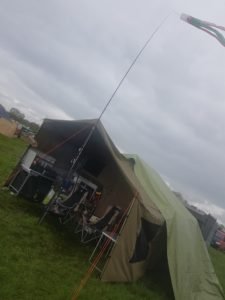 April was in fine form again with April’s showers being the order of the day, well two days. Friday and Saturday were both fairly damp and dismal! The weekend ended with an attempt at improvement though, by Sunday we had some semblance of dryness and the sun even tried its hardest to poke through the clouds but sadly to no avail. Sunday was also noticeably chillier than the previous two days with a slight breeze that just happen to want to blow into our annex, whereas we had been sheltered from it all weekend.

And on that note, I suppose my first acknowledgement should be given to our trailer on its second outing. It performed exceptionally well and both Lis and I are starting to get into the swing of which jobs are who’s during setup. Once we’ve cracked that, we’ll be fully setup in no time. Mind you an hour to be setup and have the kettle on is already perfectly respectable going if you ask me. On this occasion though I had purchased a very large green tarpaulin which we pulled over the sleeping compartment to add that extra layer of waterproof protection against the unrelenting rain that pounded us throughout Friday and early Saturday. 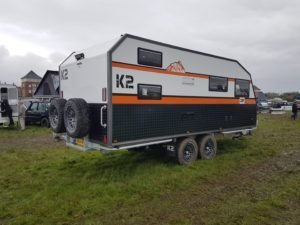 So, to the show itself, this being the first AO Spring event I’m not sure anyone really knew what to expect but all in all I was pleasantly surprised. Of course, I expected there to be some comparisons to the late Summer AO, but I wasn’t sure how closely the two would compare. As it turned out, except for the layout it was pretty much the same as all the other AO shows we’ve been too. The same friendly atmosphere, the excellent speakers, workshops and seminars and such a massive collection of overlanding vehicles. An absolute overlanders dream show, if it’s ideas your after you’ve come to the right place. If it’s overland porn you’re after, you’ve still come to the right place. If it’s just another Land Rover show with acres of spares, parts and accessories for your Defender then you’re probably best waiting for Malvern or Kelmarsh in a few week’s time.

One of the many seminars to stand out for me was the very excellent Bush Mechanics (https://www.bushmechanics.co.uk/), regulars at AO for as long as I’ve been attending but also worthy of note was Zoe Cano (https://www.zoecano.com/) – writer, adventurer, photographer. Who has travelled the world, she was a great speaker and delivered a great Q&A at the end of her seminar. The other one that stood out for me was the seminar delivered by Mac MacKenny (apologies if I’ve misspelled your name) of Driven to Extremes (http://www.driventoextremes.org/), an organisation that helps veterans suffering from PTSD by taking them on extreme overlanding expeditions. Being ex-military myself that one is close to my heart. Mac did say that anyone wanting to help may contact him and that is certainly on my list of things to do just as soon as I get a chance to do so. He gave a very moving account of his life to date as well as how that had encouraged him to setup Driven to Extremes and in turn help others who it turns out were suffering in similar ways to what he had previously experienced. 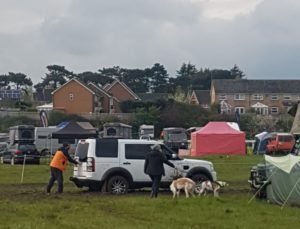 Saturday, saw us venture around the various stands and food court. There was some great travel writer’s setup with small stands indoors, presumably to keep their books dry and some overland tour guides touting their skills in adventure travel and guiding. These guys between them offered a wealth of skills and knowledge and I wouldn’t hesitate to recommend them if you plan on travelling further afield, particularly Northern Africa and some parts of Europe. We also took the opportunity between the showers to get out and meet up with the Just Escape team of Matt, Tina and Gary and of course Puddles, Matilda and Bubbles their  modes of transport. We’d followed the builds on Instagram for months now and an opportunity to see the vehicles up close and personal and meet the guys was one that we were never going to 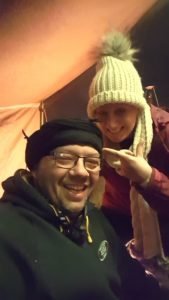 miss. Many of the larger trucks that we saw are regulars at the AO but nevertheless you can never get too much of these things if it’s what you happen to be into. I mean have you ever seen an overland truck with a rear balcony and patio set? No? Neither had we until we visited the AO!

Lisa wanted BBQ Saturday and her favourite Chinese chicken so a quick trip out of the showground and to a local supermarket to pick up the necessary ingredients and few hours later with Alys tucked into her cosy warm bed for the night the BBQ was alight, the chicken sizzling and the vodka poured. But before we had time to enjoy any of that though, there was the small matter of falling around laughing at one of the disco3.co.uk lads who managed to get his Discovery stuck in the mud! 3 of us pushing nearly 3 tonnes of 4×4 was getting him nowhere, now don’t tell anyone but in the end a defender had to pull him out.  Action over and we settled down for the night and had a right good laugh.  Which reminded us of the importance of still being able to get away on our own sometimes, it’s fun and we definitely enjoy each other’s company. We both love club life but to have some ‘us time’ at some of these events is second to none. Lots of laughs later and a quick lesson in tying a shemagh into all sorts of weird positions put us to bed shortly after midnight, mostly due to me starting to feel the chill as I’d lost my Tilley hat and left my bobble hats at home.

Up early on Sunday and we were ready for day two. Or at least we were after our ‘just cooked’ brekki. We knew our gas was on the way out and we assumed, as the flames started to die down and as sausages were half cooked that the gas had gone. Turned out the gas hadn’t actually been turned back on as we always turn it off before bed. So, the gong for being a bit silly goes to both of us there for thinking the worst when actually all we had to do was realise that we hadn’t performed our regular routing and turned it back on. Today was seminar day and as I have already eluded too, some great speakers that are well worth a watch if you haven’t seen them already. I had hoped to put the drone up today for the vlog, but it was breezy and having checked Air Map realised we were right on the edge of a glider warning area. Even though I knew there’d be no gliders in the air due to the weather I decided I didn’t want to chance it. What we did see today was an amazing off-road caravan called the K2, very impressive piece of kit. However, I almost fell over laughing when I saw this pretty impressive beast being towed out of the showground at the end of the day by a VW Toureg type vehicle. Get a decent 4×4 on the front of it gents, it’ll boost your street cred no end!

Just before the big pack away started I got a chance to speak to some of the Bugout North Wales guys. One of them had recently posted a Vlog on YT about their experiences whilst driving the North Coast 500 which we intend to complete this August over the course of 10 days. very helpful chat and a thoroughly nice group of gents. But if any of you are reading this, the dog is mine, but we might let you borrow him occasionally. Time to pack up and watch the tracks around the campsite get thoroughly churned up as heavily laden vehicles with mud tyres started to leave. Thankfully the D3 had no trouble moving around after setting the correct Terrain Response Mode and wearing her General Grabber AT3’s. We were packed up in a little over one hour and on our way home by 4pm. 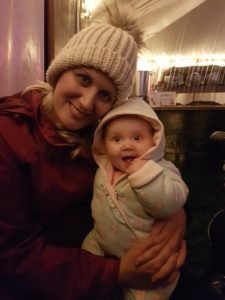 All in all, a great weekend. Roll on the late Summer Show in September. Tom Mc an excellent job by your good self and your team of marshals as usual. I take my hat off to you.

If we don’t see you on our travels, we’ll see you at Kelmarsh Land Rover Show in June.

P.s. keep an eye out for the Vlog coming in next few days over on our You Tube Channel