Only a short insert this time folks and I’ll start with the negatives, birthday celebrations aside I felt the show this year was a bit lacklustre. So this is more a thanks to the members of South Wales Land Rover Club whose stand we were on for the weekend, for keeping us entertained more than it is a writeup about the show itself. Overall both Lis and I are starting to feel that the shows are becoming a bit of ‘same old, same old’.  Two shows in particular are the exception to that rule though and whilst others may disagree, these are our thoughts. The  Adventure Overland show with its interesting people that are always happy to impart their wealth of skills and knowledge, not to mention the plethora of vehicles in all their different shapes and sizes that are on show, Tom Mc does an astounding job of organising such a large event and now potentially twice yearly too with the introduction of the Spring event. And the Billing 4×4 Show that’s run by a family whom I have had the pleasure of meeting on several occasions and are as friendly as they come! Compare those to big company operated shows such as this one and you see how it can be done differently as soon as it is removed from the confines of commercialism. Though in the case of Billing there is the small matter of that tremendous off-road course too which I’ve no doubt attracts the crowds. Plus this year, the potential to break the Guinness World Record attempt for most Land/Range Rovers in a single parade. Most of the rest of the shows on the circuit have almost blurred into one. Don’t get me wrong, it’s a great opportunity to bump into friends you probably wouldn’t otherwise see because some of the exhibitors and visitors come from far and wide. Ron Wood and his Liverpool Land Rover Club popped over to say hi this weekend for example and we bumped into Edd and family from 4×4 Response. But for the most part we can often say we have seen it all before.

That said, Challenge South West always put on a good arena display at Malvern and keep the visitors entertained (note I don’t use the word crowds there as there was a distinct lack of them). Though, one thing that bothered me about the arena displays was that there was no itinerary posted. I often only want to see certain things in the arena and if I don’t know what time they are on I’m less likely to hang around and wait to see them. In my own opinion though this year saw a notable decline in both visitor numbers and trade stands on last year. One trader apparently outright blamed Brexit for that, not sure a LR show is the place for politics personally so I’d have quickly parted company with that conversation where I one of its participants.  Incidentally, a number of traders started packing up early on the Sunday and they appeared to end the arena schedule an hour ahead of time suggesting to us at least that the show actually closed early! 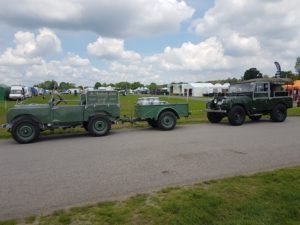 Nevertheless, we will no doubt be back again next year as it is our local show and South Wales Land Rover club always has a good turnout of members because of that too. Let’s hope that with plenty of continued support Malvern can grow again and become the show it has the potential to be. Mark Woodward if you happen to be reading this, I’d suggest more advertising wouldn’t go amiss either.

So onwards and upwards to Friday and Saturday nights festivities. Well, that is, what I remember of Friday night anyway. I certainly don’t remember making it to bed! And Saturday was a struggle, especially in the 25 degree heat of the day. I had, however, recovered enough by the evening to consume a few more  ciders whilst sat around a fire, well 3 fires actually and a lot of wood to burn having spent the whole of Friday night in the marquee having a right old laugh! I seem to recall the marquee being packed until the wee small hours of Saturday morning but come midnight on the Saturday there were just 5 of us left sat around the fire. The night before obviously having taken its toll! 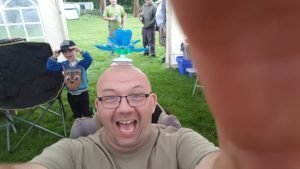 On Friday I was graced with birthday cake, card and a cup. None of which I was expecting so big thanks to all at South Wales Land Rover Club that came along, that entertained, that cooked (must not forget Dave and Wendy’s mammoth effort who cooked for the whole club on both days). People say your only 40 once, well I say I am only every age once but I’ve got to say that with my family by my side doing one of my very favourite things (travelling that is not consuming) and my extended club family all around us you really did make it one to remember. So if I haven’t said it already massive thanks to you all.

One more thanks you before I sign off until next time. Last but by no means  least thanks also to Mam for putting on a mini birthday spread at home when we got home on the Sunday. You are the best! 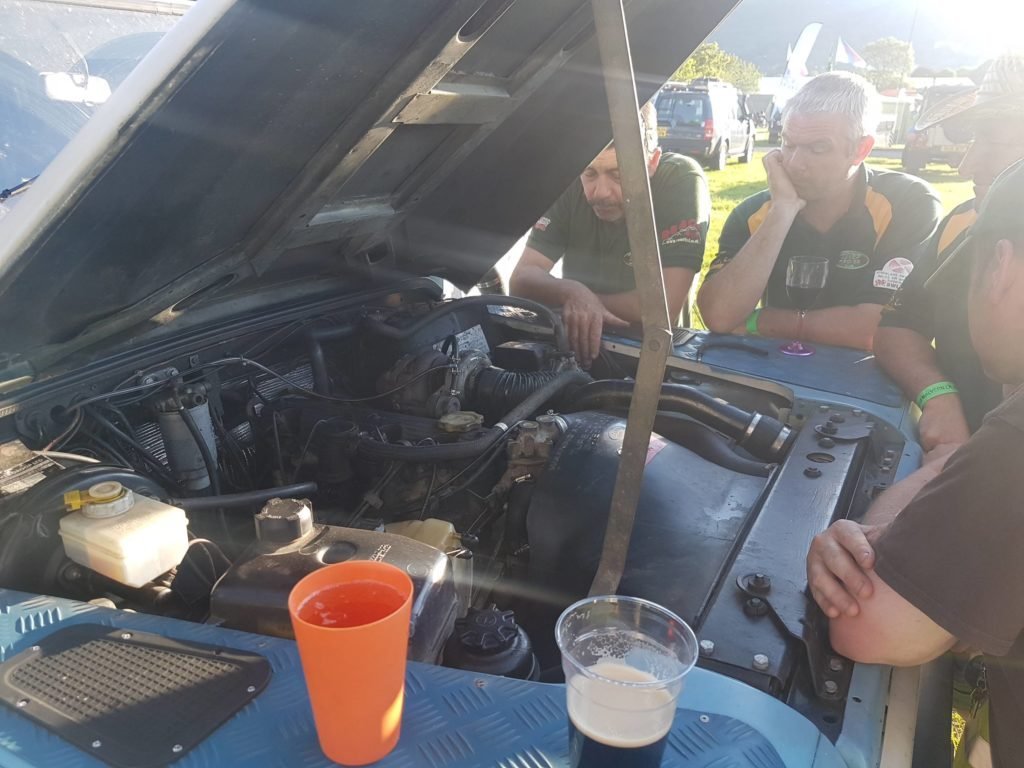 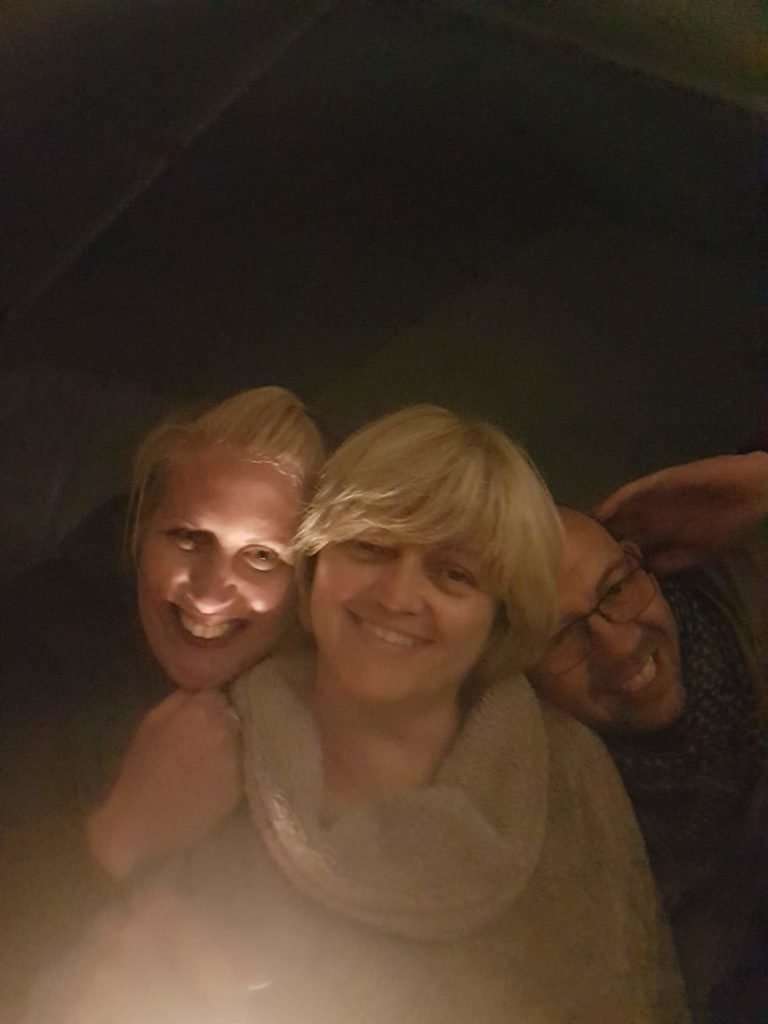 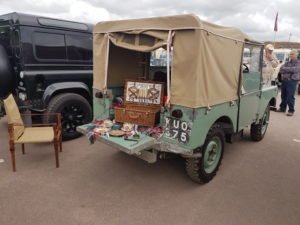 We arrived late due to me over-running in work and immediately  upon arrival we remembered our ‘point to note’ from the 2017 show! Do arrive early so you can get on the show side of the camp site. You see whilst the show is one of our faves, the campsite is less than ideal. That is to say it is sort of divided in two by a huge earthen mound. If you happen to find yourself arriving late you will almost certainly end up having to stay on the car park side if the camp site (yes, I said car park, literally!). And from that side you have no view of the show at all until you’ve climbed the earth mound which is vast enough for many campers but than you have a full unbridled view of the rest of the campsite and the fabulous showground being watched over by the equally magnificent British Motor Museum and the Collections Centre. Anyway, it was setup tent, get baby fed and off to land of nod, pour few swift vodkas and with not even time for a fire bed time for us too. historic vehicles in the arena. The Classic always manages to pull in such a great selection. On more than one occasion I feel my mind wandering off to our own Welsh Festival of Land Rovers that’s organised for Mid May and I think to myself if we can even muster a fraction of what this show can we’ll have done ourselves proud. At this point I wish I had brought my drone, thinking that I would have got some great aerial shots but the thing I always worry about is falling foul of the law when flying too close to crowds with the minimum being 150 meters away. Too far for any decent shots to show the vehicles off at least.

At the Adventure Overland Show the DJ in his converted Land Rover came by the name of 4×4 Traks, this time it was the turn of Beat n Trak. Great ideas, basically a Land Rover 110 Defender with a raising roof and a set of decks thrown in the back. I also got to meet Nick Enston of Instagram landroverphotoalbum fame no less (www.instagram.com/landroverphotoalbum). Little did we know that we’d soon meet again after that on a trip down a popular Welsh lane with the team form a rather well known Land Rover mag. 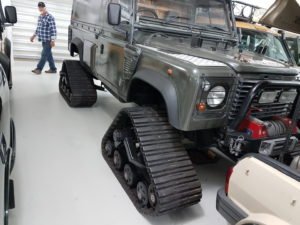 Lazy morning followed by another visit to the arena where  today’s events looked slightly different to yesterdays. Beat N Track had competition today with the regular trio and the amazing sounds of My Favorite Things, a period group that perfectly suits the show. Last but by now means least what trip to this show would be complete without a visit to the museum and having the opportunity to walk past the iconic 166 HUE. By the way whilst a visit to the museum is a must many of the people I spoke to seem to have missed out the collections centre all together where actually there are some Land Rovers in there that’ll really knock your socks off. Honest, you absolutely must go into both buildings.