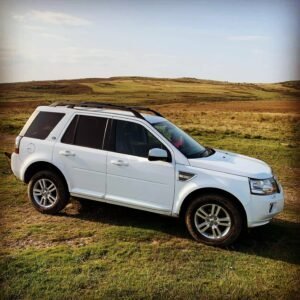 We have! We bought a Freelander 2. I know I’ve said in a previous post many moons again that whilst I totally have the overland bug I’m also into many other things too such as bushcraft and traditional skills, outdoor action in general – climbing, mountaineering etc but my first love is Land Rovers and they have been for as long as I can remember. So I am very well versed in the usual Chelsea tractor memes department when it comes to serious travellers, overlanders, off roaders opinion of a Freelander 2 (LR2 in the US) for long distance travel and generally getting it in amongst the brown stuff.

I guess though it is all relative to what you expect to get out of your vehicle. Don’t get me wrong, I’ve had some serious mud stuff contenders over the years but now all I want is something I know will get me out of a marginally sticky situation which will most likely happen on a worn out section of forestry track. Something that can comfortably pull the trailer behind us and something that has a fantabulous safety record where I know my family will always be safe.

To that end I decided on a Freelander for a change, it seems to tick all the boxes though I’ve not fully put it through it’s paces yet but I’m confident that when I need it to step up to the plate it will do so with impeccable ability.

It’s totally different to what I’ve driven before though, in are the Special Programs just like the D3 and the Haldex unit but out is the low box – Haldex is some sort of special black magic coupler that decides if the car should drive in 2 or 4 wheel drive apparently.  It really is a pleasure to drive and it pulls the trailer with no effort.

I’m slightly worried about the day I have to do a very steep hill start but only when I fins such a hill whilst towing the trailer will I know if that concern is justified. In the past those sorts of things have warranted switching to low box to get us going but only time will tell how we go with that. I’m guessing switching to sand mode might help in situations like that.